No. 1 Silk Mill and Museum

Whereas our first weekend in China was spent securing life's necessities, our second weekend presented an opportunity for leisure. With rain in the forecast, we had to choose an indoor activity and it was recommended to visit the silk museum.

There are two silk museums in town, but everyone agreed that Number 1 Silk Mill was the place to go...so we went. We just found it in our taxi-card book, showed the driver and were on the way.

No one warned us that the silk museum has an off-season, but it does and we found it. During the summer they have live silk worms available to see and touch, during the colder months they have plastic replicas of worms to see and touch. It wasn't a huge disappointment because the tour is free and it didn't take too long to get there from our apartment.

When we arrived in mid-March, they had just planted the mulberry bushes. In May the bushes will have leaves, and those leaves are used to feed the worms. I think it might be interesting to go back in June or July to see the worms. 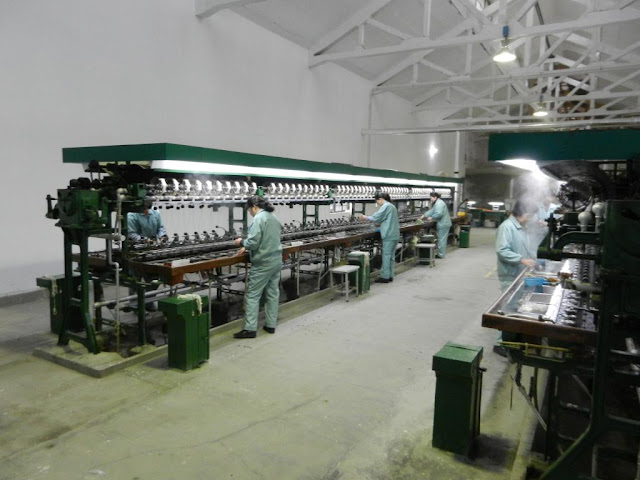 This silk mill isn't really anything more than a demonstration area. They have a small factory set up to demonstrate the steps to turn silk cocoons into cloth. When we went through the first time with the tour guide, the factory was running. We went through alone and unannounced later - the machines were shut down and the workers were surfing the web on their smart phones.

The first step is to sort the cocoons. Defective cocoons are destroyed and the remaining are sorted according to the number of pupa inside. If a single pupa exists in the cocoon, then it was constructed with a single strand of silk and will be used to make fine silk thread and cloth. If two pupae are inside, the cocoon was constructed with two strands and will be used to make things like stuffing for quilts.

The cocoons are heated (boiled or steamed, it wasn't clear) to soften them - I suppose this step also kills the pupae. To ensure continuation of the species, breeders allow some moths to emerge. Our guide said the moths can not fly because their wings are too small. Like many insect species, the moths' only purpose is to mate and die. 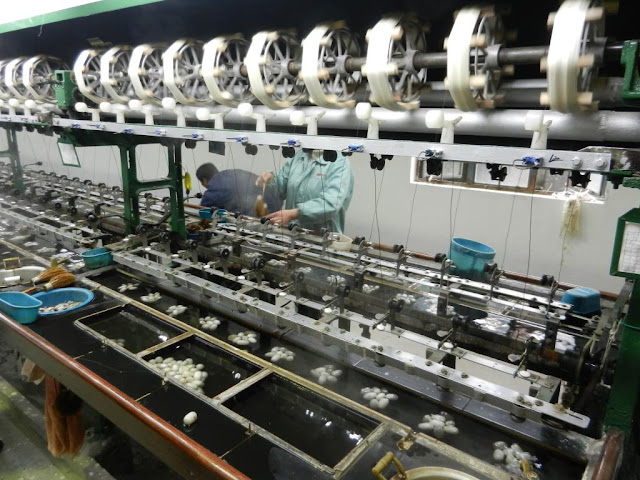 The "single pupa" cocoons are then transformed into thread. To do this they combine the strands from eight cocoons into a single silk thread. As the spools above turn, eight strands of silk are unrolled from the eight floating cocoons below. Each cocoon has strands up to a mile long. 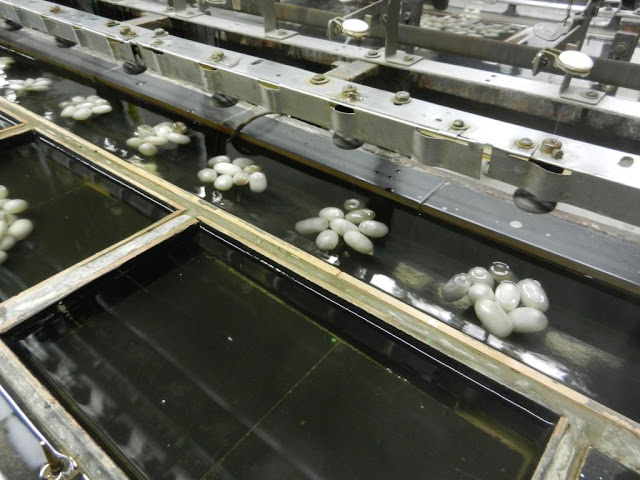 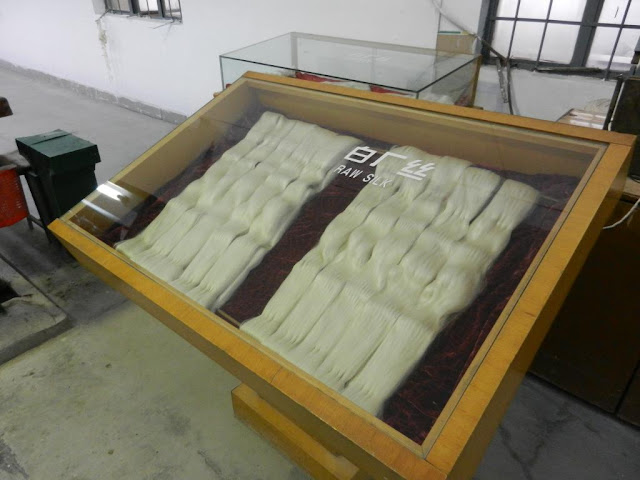 According to our guide, the raw silk looks like "Lady Gaga's hair." He also said some cocoons will produce silk of different colors, but white is preferred because it is easily dyed. 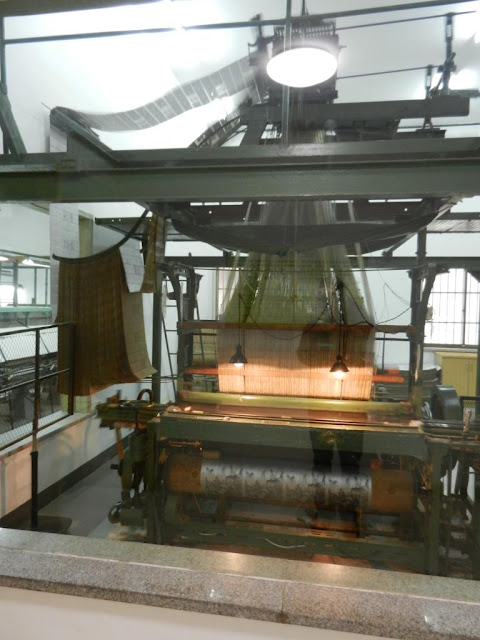 The "factory" had a few looms running. The one pictured is 150 years old, but has been retrofitted with electric power. Some quick internet surfing reveals this may be a Jacquard loom. On the left of the picture is a spool of punch cards which gives instructions to create a pattern. You can see the resulting pattern near the bottom of this machine is a silver and black mountain scene. 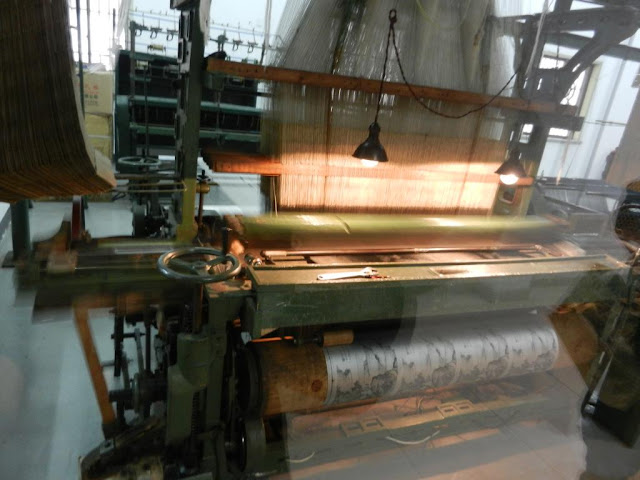 This machine is able to produce five meters of clothe per day and used only for demonstration purposes. New technology can make much more per day.


The "double pupae" cocoons go through a process of stretching them a little at a time until finally it is ready to be used. We got to watch the ladies stretch one cocoon to be used as stuffing in a queen sized comforter. After watching, Shayne was invited to participate...it takes practice to get good, or so she was reassured. They say a silk stuffed comforter keeps you warm in winter and cool in summer. 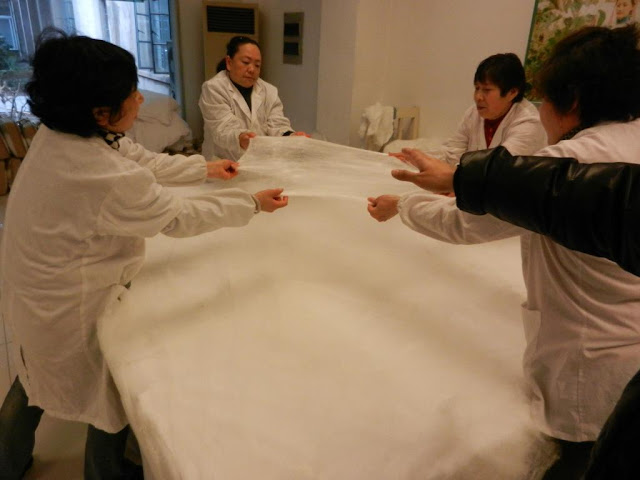 And like all good tourist traps, our guide deposited us in a souvenir shop. We had been told to not buy anything there because it's targeted for people who are around for a limited time, in fact there were bus loads of people milling around the store looking for something to take home. We have the ways and means to go to better/cheaper places for purchasing silk.

If you go, I recommend using one of the tour guides. Our tour was free and the guide spoke very good English, but he kind of rushed us through the place. After the tour we walked back through at our own pace and took the time to read some poorly translated signs.

Email ThisBlogThis!Share to TwitterShare to FacebookShare to Pinterest
Labels: Sight Seeing in China